AirTags: Everything you need to know about Apple’s object tracker

At its Spring Loaded event, Apple finally launched the long-rumored object tracker of its own – the AirTag. If you are familiar with Tile’s offering, you know what an object tracker does. Moreover, AirTag supports Ultra-Wideband technology for more accurate location tracking. But what is it exactly? And, does it deserve the $29 price tag? Let’s find out! Here’s everything you need to know about Apple AirTag.

Apple’s new object tracker, AirTag is essentially an extension of the company’s Find My app, which allows its users to locate their devices faster than just having to go through your house looking for your iPhone. It uses encrypted end-to-end anonymous network that includes more than a billion Apple devices. And, it allows users to locate a missing iPhone, Apple Watch iPad, and Mac even when offline. AirTags take it a step further.

Apple AirTag is a small accessory that helps keep track of and find the items that matter most with Apple’s Find My app. It can be attached to a handbag, keys, backpack, or other items, enabling you to tap into the vast and locate a lost item. It does so while keeping location data private and anonymous with end-to-end encryption.

As for physical dimensions, an AirTag is small and lightweight. It measures 1.26 x 0.31-inches and weighs just 11 grams. Plus, you get an IP67 rating for dust and water resistance. A built-in speaker plays sounds to help locate AirTag, while a removable cover makes it easy for users to replace the battery.

Each AirTag comes equipped with the Apple-designed U1 chip using Ultra-Wideband technology. It enables Precision Finding for the iPhone 11 and iPhone 12 users, which can more accurately determine the distance and direction to a lost AirTag when it is in range. The Precision Finding feature works by fusing input from the camera, ARKit, accelerometer, and gyroscope. It then guides the user to AirTag using a combination of sound, haptics, and visual feedback.

The Apple AirTags also includes support for the accessibility features built into iOS. You can use Precision Finding with VoiceOver, which can direct users who are blind or low-vision to AirTag with directions like “AirTag is 9 feet away on your left.”

How to set up an AirTag?

Notably, AirTags require iPhone or iPod touch running iOS 14.5 or later, or an iPad running iPadOS 14.5 or later. Furthermore, certain features require Find My to be enabled in iCloud settings.

If you’ve ever set up AirPods, you already know how to set up an AirTag. The device features the same setup experience as AirPods — just bring AirTag close to iPhone and it will connect. Users can assign AirTag to an item and name it with a default like “Keys” or “Jacket,” or provide a custom name of their choosing.

How do AirTags work? 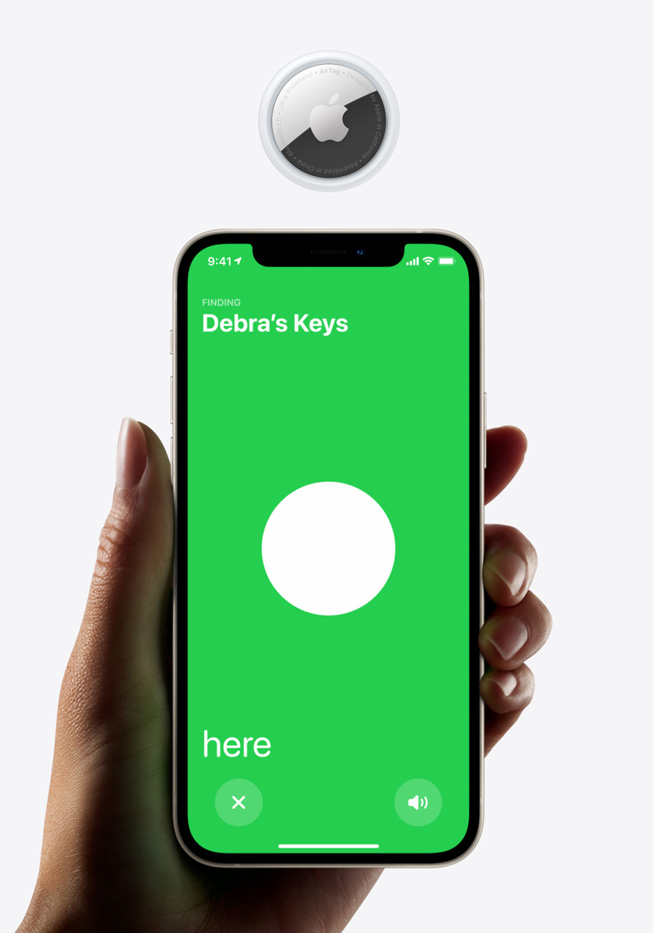 Once you set up an AirTag, it will appear in the new Items tab in the Find My app. Here, you can view the item’s current or last known location on a map. If you misplace your item and it is within Bluetooth range, you can use the Find My app to play a sound from the AirTag to help locate it. You can also ask Siri to find their item, and AirTag will play a sound if it is nearby.

If you lost a device with AirTag on it, and it is out of Bluetooth range, the Find My network can help track it down. It can detect Bluetooth signals from a lost AirTag and relay the location back to its owner, all in the background, anonymously and privately.

Further, you can also AirTag into Lost Mode and be notified when it is in range or has been located by the vast Find My network. Moreover, if a lost AirTag is found by someone, they can tap it using their iPhone or any NFC-capable device and be taken to a website that will display a contact phone number for the owner, if they have provided one.

Customers can personalize AirTag with free engraving, including text and a selection of 31 emoji, when purchasing from the Apple website. Users can easily place AirTag into a bag or pocket on its own. Plus, you get a wide range of Apple-designed AirTag accessories, including the Polyurethane Loop, which is both lightweight and durable, and the Leather Loop and Leather Key Ring, which features specially tanned European leather.

An AirTag is designed to keep location data private and secure

Apple says that an AirTag doesn’t store location data or location history. Moreover, communication with the Find My network is end-to-end encrypted. Hence, only the owner of a device has access to its location data, and no one, including Apple, knows the identity or location of any device that helped find it.

Each AirTag is “designed with a set of proactive features that discourage unwanted tracking, an industry first,” says Apple. Unwanted location tracking is protected by rotating Bluetooth signal identifiers transmitted by AirTag frequently. Moreover, iOS devices can also detect an AirTag that isn’t with its owner, and notify the user if an unknown AirTag is seen to be traveling with them from place to place over time.

If you don’t have an iOS device with you and an AirTag is separated from its owner or an extended period of time will play a sound when moved to draw attention to it. Plus, if a user detects an unknown AirTag, they can tap it with their iPhone or NFC-capable device and instructions will guide them to disable the unknown AirTag.

Do AirTags work with Android?

AirTags can be purchased in one and four packs for just $29 and $99, respectively, and will be available beginning Friday, April 30. Are you planning to purchase the AirTags alongside your new purple iPhone 12? You might want to look at the best iPhone 12 cases.

Plus, there’s AirTag Hermès that includes the premium Bag Charm and Key Ring in Fauve Barénia, Bleu Indigo, and Orange leather, as well as the Luggage Tag and Travel Tag in Fauve Barénia leather, all of which will be available beginning Friday, April 30.

What devices do Apple AirTags support?

The object tracker supports the is compatible with the following devices:

The post AirTags: Everything you need to know about Apple’s object tracker appeared first on Pocketnow.

from Pocketnow
Get our amazing phone cases at carolay.co
IFTTT Pocketnow